Before the Nepal 2015 earthquakes, Nepal had made important progress on the elimination of the harmful practice of child marriage. In 2014, the Government, UNICEF and Girls Not Brides started developing a cross-sectoral Strategy to End Child Marriage, which was to be followed by a National Plan of Action to End Child Marriage.

Then the earthquake hit and these important initiatives were put on hold, while many girls and boys from earthquake affected areas were at even higher risk of early marriage. After a disaster, when resources are extremely limited, families face extremely tough choices. Some families worry they won’t have enough money or food to take care of everyone. Some parents may also worry that their maturing daughters may be at risk of trafficking, sexual violence, or rape. The post-earthquake conditions leave women and girls even more vulnerable to sexual violence than before. The tight and exposed living quarters of tents and tarpaulins mean girls sometimes do not feel safe. Going to the toilet can be a terrifying experience when toilets are far away, not gender segregated, lack door locks and exposed. 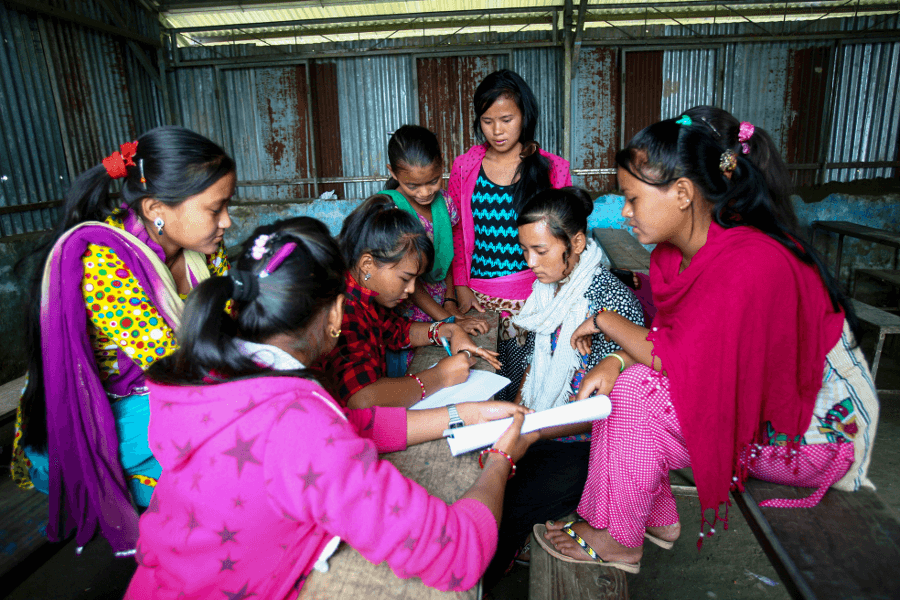 Despite clear laws against child marriage (the legal age to marry in Nepal is 20), a desperate family may see marriage as the best option to keep their daughter safe and fed by her husband’s family. A girl herself might also feel the dual pulls of not wanting to burden her family and not wanting to risk a marriage to someone she doesn’t like if she doesn’t elope on her own first.

In reality, underage brides are less safe than their single counterparts. Young brides often lack the agency with their husbands and power in their in-laws’ families to speak up against domestic and sexual violence. A daughter-in-law typically occupies the lowest status in a family and may not get as much food as other family members and be made to do exhausting labor. Girls rarely stay in school after marriage, cutting off their friendships and potential to earn income and be self-sufficient later in life. And married women are expected to start families shortly after tying the knot, even if their young bodies are not yet ready for the enormous task. Girls with underdeveloped bodies are at high risk for complications during childbirth and their children are less likely to survive childhood.

We believe the best way to combat child marriage is through education about the risks of marrying early, and about the benefits of staying in school longer. Our workshops help girls understand these risks and benefits. They then share what they learn with their families and communities through community ceremonies. But in the post-disaster situation, we wanted to reach as many people as possible with this safety message. So four months after the disaster we’ve teamed up with People in Need and Oxfam to produce a radio drama about two young girls navigating these issues in the village and coming up with their own solutions. The drama aired on Radio Sindhu, a community radio station with a long history of broadcasting public health and other critical information to Sindhupalchok. Radio is an incredibly powerful tool in the hills and one of the communication resources people continue to turn to after the earthquake. You can listen to the radio drama we co-created here (in Nepali).

Few months after this successful partnership, we again teamed up with Oxfam, Women for Human Rights, and People in Need to develop a comic book titled Sapana, accompanied by a poster, addressed at rural adolescents who live in areas affected by the earthquake. The comic titled “Too Young to Marry” tells the story of four young people, of whom two are considering eloping. The comic was launched at an event in Kathmandu in the fall of 2016 and is being distributed to our workshop participants.

“We have many cases of child marriage, I think we should tell parents not to allow early marriage, to support education and promote regular schooling.”
HT mentor